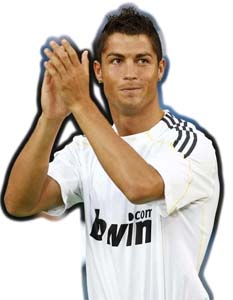 Ronaldo was born in Funchal, Madeira, Portugal on 5 February 1985. His father's name is Jose Dinis Aveiro. His mother's name is Maria Dolores Dos Santos Aveiro. He has one brother, Hugo, and two sisters, Elma and Liliana Catia.

Cristiano Ronaldo is a famous footballer. He is from Portugal, a country in Europe. Before playing for Real Madrid, he has played for Sporting Lisbon and Manchester United.

People knows Cristiano Ronaldo is a good football player. He can run fast and dribble well. As a striker, he becomes a goal getter for Manchester United and Real Madrid along his career. He can get more than 30 goals every season.