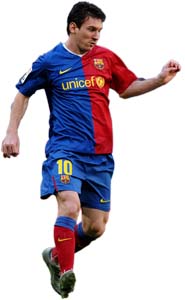 His full name is Lionel Andres Messi. He was born in Rosario, Argentina, on 24 June 1987. His father's name is Jorge Horacio Messi, and his mother is Celia Maria Cuccittini. He has 2 brothers and 1 sister. His brothers names are Rodrigo and Matias. His sister's name is Maria Sol.

Unfortunately, his achievement in La Liga doesn't bring anything to his career in Argentina's team. Since he has joined the national team, they never win a throphy.

Messi is well-known as a very kindhearted person. He is very polite in and outside the pitch. He founds an institution of charity to help children in health and education.