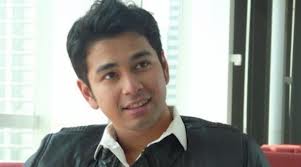 His full name is Raffi Faridz Ahmad. People usually call him Raffi Ahmad or Raffi. He was born on 17 February 1987 in Bandung, West Java. He is a presenter and  a famous actor in Indonesia.

Raffi has 2 siblings. He is the first child of the family. His father's name is Munawar Ahmad and his mother is Amy Qanita.

Raffi is a good looking guy. Many girls like him. Unfortunately, he is sort of heart-breaker. He easily gets in touch with girls and has a special relationship. Let's say for example Laudya Chintya Bella, Velove Vexia and  Yuni Shara.

Raffi works as a presenter. He works with Olga Syahputra on some TV shows like Dahsyat and OMG. He also works as an actor. Some films he has ever played are Tunjuk Satu Bintang and Love is Cinta. Beside being a presenter and an actor, Raffi also works as a singer. He sings with his vocal group BBB.

Raffi has many lifetime achievements during his career. Some of them are SCTV Award 2006 as the popular artist, Panasonic Gobel Award 2011 and 2012 as the best music presenter.