Do you believe that an animal can predict what will happen? An octopus named Paul did it. 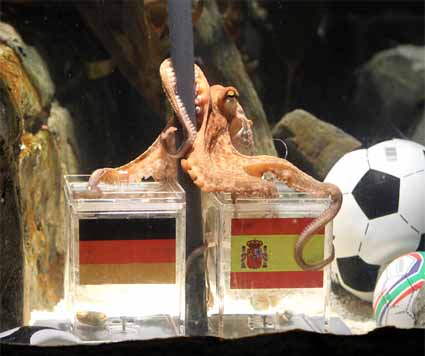 That was Paul, an octopus that predicted the winning of Spain in World Cup 2010. Paul chose the food from the box labelling Spain flag outside. It meant that he predicted that Spain would be the winner againts Netherland in the final.
His prediction was right. Spain became the winner then. Paul's prediction making him being famous since the first round of World Cup came true in the final.
Everybody believed that Paul's was amazing animal in the world. They began adored Paul. When Paul brought to Spain, he was welcomed with red carpet.