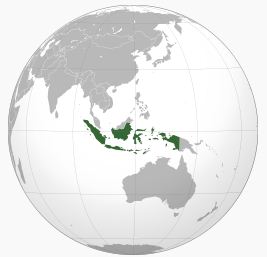 Descriptive Text about my country, Indonesia

Indonesia is my country. Indonesians got the independence day on August 17, 1945. They got it after struglging against colonizers, Netherland and Japan.

Indonesia is located 6 degrees South and 106 degrees East. The capital city is Jakarta. The flag is red and white. The language is Bahasa Indonesia. The national song is Indonesia Raya created by WR. Soepratman. The motto is Bhinneka Tunggal Ika means Although we have many differences but we are one.

Indonesia is a big country. It is an archipelago. It has 1,904,569 km square. There are 5 big islands, Java, Sumatra, Kalimantan, Sulawesi, and Papua.

Indonesia is a republic. The country is managed by a president and council. So far, Indonesia has been led by 6 presidents. They are Ir. Soekarno, Soeharto, BJ. Habibie, Abdurahman Wahid, Megawati, and Susilo Bambang Yudhoyono.
at Desember 03, 2012
Labels: Teks Descriptive